Past and present, Muslim militants continue relying on the same inhumane tactics to terrorize “infidels.”  The devastating effects of one of these occurred last August in Turkey: a child “recruited” by the Islamic State blew himself up in a suicide attack that left at least 51 people—mostly fellow children—dead. This child was one of countless, nameless, faceless children … END_OF_DOCUMENT_TOKEN_TO_BE_REPLACED 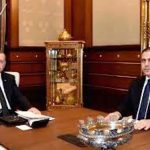 According to several media, Hakan Fidan, the head of Turkey's National Intelligence Organization, recently condemned Russian military intervention in Syria by saying Vladimir Putin was trying to smother the rise of political Islam in the guise of ISIS, or the Islamic State.  He further urged the world to accept ISIS, reportedly saying: ISIS is a reality and we have to accept … END_OF_DOCUMENT_TOKEN_TO_BE_REPLACED

Coptic Solidarity  Turkey’s Muslims recently invaded with violent intent a number of Armenian (Christian) neighborhoods in Istanbul. “These districts must be turned into Armenian and Kurdish cemeteries,” chanted the angry Turks who support the Erdogan government. This came in response to ongoing clashes between Turkish authorities and the Kurdish Worker’s Party in the … END_OF_DOCUMENT_TOKEN_TO_BE_REPLACED

Note: This essay was written for RaymondIbrahim.com by André Masséna. Albania is ranked as one of the least religious countries in the world, with only 30% of the population stating they consider religion to be important, according to Gallup. Yet, roughly 60% of the population state they belong to Sunni Islam, with only a 17% minority Christians. Such statistics seem to create … END_OF_DOCUMENT_TOKEN_TO_BE_REPLACED

On June 9, a Muslim man attacked a church in the Kadıköy district of İstanbul with a Molotov cocktail, setting the building's door on fire. In a video of the attack, the man is seen shouting “Allahu Akbar” [Allah is greater] and “Revenge will be taken for Al-Aqsa Mosque” as he throws a bomb at the Aya Triada Orthodox Church.  The door of the Christian worship building caught … END_OF_DOCUMENT_TOKEN_TO_BE_REPLACED